This song HAS been translated before, I’m sure of it.
But I was the first translating it. Years and years ago, before there was at least one english translation available for it, I translated it in italian. And almost nailed it.
Now, I can’t leave it behind, it’s one of the songs that I’ve loved the most and one of the most important japanese doujin/indie songs to me. And I’m also ready to translate it in a better way.
If I’m not wrong, this is a cover of a Vocaloid song (?), but as some of you may know, I’m not really that fond of Vocaloid.
Long story short, I prefer human voices over robot voices. Though there are some vocaloid-only songs that aren’t bad at all, probably one of those will be posted soon (as this one, something I’ve already “translated” on my old old wordpress).
Anyway, this song’s value isn’t the same it had some times ago, I got it by listening to it again.
It just doesn’t give me the chills it used to, but I still love it.
Hanatan’s vocals are simply amazing as always, and Yuyoyuppe is one of the most ingenious doujin arranger I’ve ever listened to.
I didn’t look up the booklet for these lyrics, and on each site I’ve found them on, there were two things.
The first is that “真実” (shinjitsu) is wrote everywhere as 辛い真実 (karai shinjitsu, bitter truth), but I mistook it for an error and removed it. But I still kept the “bitter truth” translation.
Similar to this, there was 過ぎ去った (sugisatta) instead of 去った (satta) in the last stanza, but it’s read as “satta”, so I’ve left it this way. They both mean the same thing, after all.
…Also, some comments on youtube for this song say “Luka (vocaloid)’s version is better than this!”
I’m a gentle type of person, I think everyone has their own personal tastes and anyone could like what they want. .
…I mean. THIS ONE is better, it’s a fact. You may like that other version more, but it doesn’t mean that, objectively, this version is inferior. Because it isn’t, technically speaking.

Those boring days are being lived on and on
Without knowing if there was a meaning or such to them;
Even though the time has erased everything, I won’t change
And that’s why I’m still alive

Reach for it, my last voice, as a light that starts glowing after happines has faded,
Because I’d rather choose a bitter truth over a sweet lie

It’s more stunning than a pitch-black night sky
Because the countless stars are shining;
I’m sure that the past and present I’m living
Will turn into truth

Reach for it, my last voice, as a light that starts glowing after happines has faded,
Because I’d rather choose a bitter truth over a sweet lie 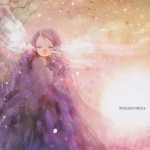