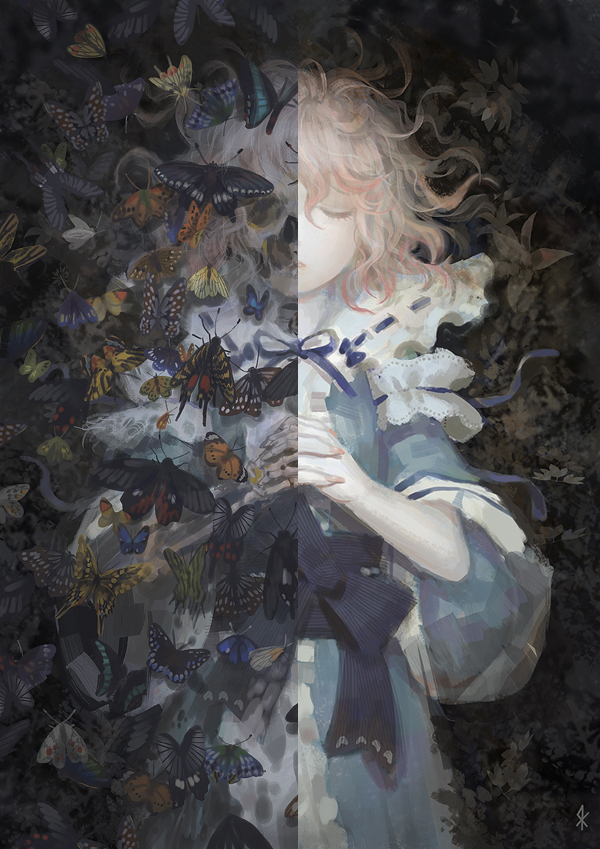 It’s not much different from the other request I got from the same person, RockPlus – Funeral Song.
But this one had a ton of kanjis I’ve never saw before.
Seriously, that’s one of the songs I struggled the most transcribing!
Be sure to read the notes and check them out.
About the song, it probably isn’t my genre, nor the type of music that I’d enjoy listening to.
But still, I must say, pretty unique, being this circle the only one to arrange touhou themes in such nursery-rhyme fashion.

On the weeping cherry tree
Only the ocher grows redder
And on my fingers, unfastening from it
Flows the dew of the dead of night

And then, closing my hazy eyelids,
I’m being buried down the lake
Just like a moonlight on the faint darkness on the earth’s abyss
Sleeping here for the eternity
Beautifully, as I still don’t rot away

– First stanza: “negawakuba” (願わくば) is a pretty old-fashioned way to say “I wish for”. 満ちた (michita) means “to be full”, but being refered to “spring” (春) it should imply “in full bloom”, thus my translation.
– Second stanza: 薫き染めて (daki-shimete) ok this seriously confused me. I know for sure that the second part (染めて) is “somete” (to paint something), and that the first part, again, can be read as “kaori”, meaning “scent”. But I keep hearing “dakishimete”, meaning “to embrace”. And it’s possibile, considering that most of the things she says are read in a old-fashioned way. I leave it “dakishimete” even though I’m not really sure about this, if you can let me know what does it actually stand for, than I’d really apreciate!
– Second stanza: yeah. We have “cushion”, we have “ink”, we have everything. I don’t get its meaning, but there’s no doubt the words are wrong. Maybe a suicidal note…? Considering we’re talking about Yuyuko‘s death… (also, may be refering to the ink in the name of Yuyuko’s theme “cherry blossom of SUMIZOME“, where Sumi-zome means “ink-colored”.
– Third stanza: 枝垂れる桜 (shidareru sakura) is a strange way to write “shidarezakura“, which is a variety of the typical sakura (japanese cherry tree) with drooping branches. Being wrote in a different way, instead of simply writing “shidarezakura” I wrote “weeping cherry tree”, picturing on my mind a weeping willow.
– Third stanza: 真赭 (masoo) one of the hardest word of this song. The singer says “masofu” because of its old reading. It means “ocher”, a shade of yellow.
– Second to last stanza: 仄い and 土底, both special reading. The first one is read as “kurai”, while should have been “katamui”, the other is “tsuchi” and “soko”, but in the song it’s read as a whole segment, “tsuchi no soko”.
The first kanji is also usually featured in the word “honomeku” (仄めく) which means “to grow faint”, though it’s pretty unusual. Here, “kurai” means “darkening”, “dark”, so the meaning could be the same. I blended them togheter.
– Hey! Guess who’s back? That’s right. Last stanza: fucking 運命 (unmei) read as “sadame” again! I should start to count the times this pops out in touhou lyrics. It’s a nightmare.
– The last particle “to” (と) implies that that’s a conclusion or something heard from someone. It usually features in sentences where who’s talking is doubtful, thus I added “something tells me” before it.