After the fight against Sanegayama, I understood the fact that Ryuuko can win as well as she can lose. So, I didn’t clearly know how her battle against Gamagoori would end up. Being the protagonist, I was positive about her triumph, but can we really say something like this for sure? I mean, she’s going to fight the elite four one after another, can she really keep up the pace?
Anyway, in the next half we have our lovely flashbacks and battle scenes, as well as some really entertaining battle strategies and some wonderful scenes and frames: I really like this episode.
Let’s not waste further time, the show must go on!
(And the next subbed clip is coming soon… and right after it, another one, shorter but entertaining anyway!)

The battle continues and the Makanshoku family found a spot with a television from where they can finally see the match. Ryuuko is having trouble, anyway.

But suddenly flashback! Remember when Gamagoori was helped by Satsuki on the rooftop of his former middle school? Well, it seems he didn’t like the speech of Satsuki about her ruling the entire world. He tries to fight her, but she is far stronger than him. 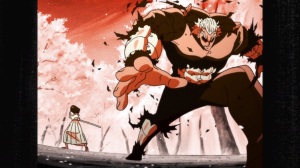 A spinning GTFO knockdown and Satsuki easily defeats the armored Gamagoori, who… 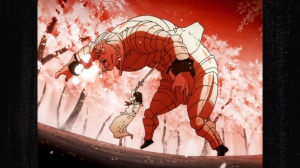 …Even all beaten up, still refuses to kneel before her. Satsuki liked this act of bravery, and decided to accept Gamagoori.

…And so the two villains joined for- WHAT THE HELL, JUST HOW F*CKING HUGE IS GAMAGOORI? OMFG

Back to the present, the battle continues, and while Ryuuko gets naked pleasing the audience and a suddenly lesbian Mako…

…She seems to find new ways to avoid getting her butt slapped around by the armored giant. I seriously thought that she was going to win using this technique, but some seconds later…

…A third form of Scourge Regalia with new weapons and sh*t. Just how many times can a Goku’s Uniform change its form? 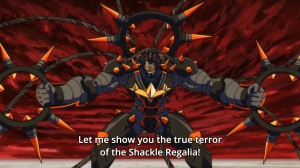 Ryuuko is in trouble: she changes back the form of her Senketsu in order to escape a trap set by Gamagoori, and loses her scissor blade. Also, I forgot to mention that Gamagoori’s armor is so thick that she can’t use her final skill to destroy it, because the life fibers are protected by an heavy armor. And yeah, her finishing move kinda hits only the life fibers.

Gamagoori attacks. She seems to have some kind of plan. She grabs a huge wire shot by Gamagoori with her and Senketsu’s teeth (Your shirt has no teeth. Just a reminder.) 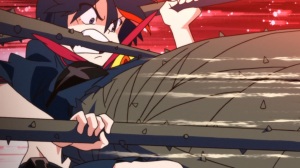 …And as the wire returns from where it has been fired, she is sucked inside Gamagoori’s armor. 10/10 pure genius.

Without her scissor blade, she has another plan: first of all, activating Senketsu’s powers… 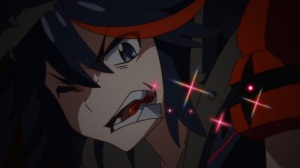 …Aaaand that’s pretty much it. Yup. Spikes!! (because a Kamui can change its form too. I mean, a Goku’s Uniform can and has only 30% life fibers, a 100% life fibers Kamui can do it better! Am I right?) 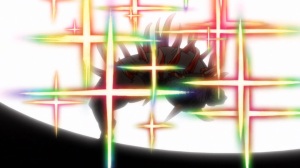 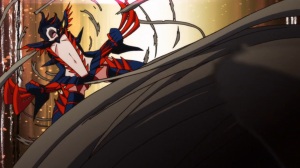 Satsuki prevents a crying and ashamed Gamagoori to commit suicide in front of anyone. “Just wipe your tears by yourself”. 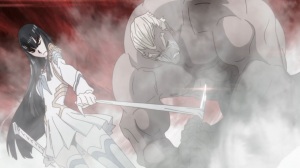 I felt so sorry for him ;_; he failed to protect the one he swore to protect… But I hope he’ll eventually come back in the future, I really liked him thanks to this episode. 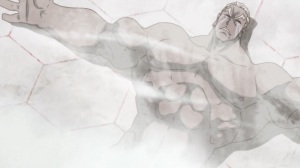 Lastly, the episode ends with the fierce look of the next fighter, as he gets on the stage.
Yes, him: The blue-haired four-eyes. 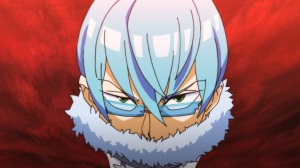 See you next week!
~Shion