This episode felt different too, but I liked it a lot anyway.
By different I mean it focused more on the plot instead of gags, but it was awesome anyway.
First of all, The guy with the needle-gun was a total badass, and I seriously hope he’ll be back again by the next episodes.
Second, the battles. Oh God, the battles. I’m not lying when I say that the battle scenes in this episode were far greater than the battle scenes in episode 3 against Lady Satsuki.
I personally liked the fight against the guy with needles (And I can’t remember his name at all) more than the fight against Lady Satsuki.
On the other hand, I found somewhat cliché the part in which Ryuuko and Senketsu are talking about the bond between humans and uniforms. I don’t know, it doesn’t seem anything new to me, for some reasons.
Anyway, in this first half (Which I released way too late…) there’s no trace of the battles I’ve talked about. Those are inpart 2 coming out tomorrow!
Let’s see anyway the best moments and what happened in the first twelve minutes of Kill La Kill 5!

I like him. He’s badass. Anyway, the episode starts with this guy (can’t remember the name, once again; inb4 2lazy to search for it) breaking throught Honnouji’s Accademy and attempting to snipe Ryuuko, but right before that he’s interrupted…

…By the gardening club’s manager, a 2-star uniform student which can grow giant monster plants from the pot on his back. He’s gonna take revenge for what Mr. Sniper did (stepping on the rooftop’s grass). He’s easily beaten, though. Oh well. 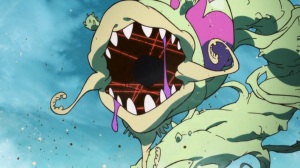 Meanwhile, Mato and Ryuuko are involved in another mess, involving the chemistry club. An easy prey, considering the only star on their uniforms. The whole battle lasts only for 20 seconds, so it’s not a big deal. 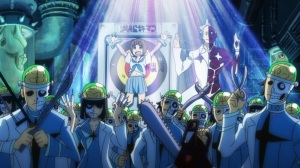 Ability unlocked! Now the scissor blade can easily change its size into a normal pair of scissor size! And Ryuuko is able to do that because… because the… ’cause… How can she do it, again? Whatever, that’s cool!

Here comes again the guy from before, shooting needles to Mako, in a comically dramatic sequence. The needles didn’t harm her, she’s just immobilized and she’ll be fine and energized afresh once the effect wore out. Lucky for you, Mako!

He’s strong. Ryuuko couldn’t even change to her Kamui form before his eyes. The guy asked Ryuuko to strip off her uniform (which is what he’s aiming for), but he’s later blocked by a member of Satsuki’s party…

…Which he meets later on the same day. We get to know that the guy is against Kamuis and Goku’s uniforms, because they slowly consume who’s wearing them, and because one can’t only rely on the power granted by the life fibers.

Meanwhile, at Mako’s place, while everyone is enjoying the dinner (this time strangely luxurious), Ryuuko is worried about the guy she meets in the morning. Senketsu knows the guy is after him and not after Ryuuko, so he tells Ryuuko to leave him behind and go to school without wearing him.

Being also an enemy of Satsuki’s party, the guy is being analyzed by Satsuki’s headquarters. I love the RPG-styled graphics. 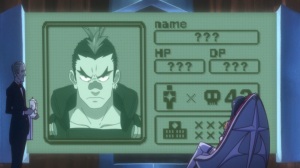 And so, the pink-haired-chick is now in charge to prevent the guy and Ryuuko to create a fuss the next day.

After talking to Senketsu one more time (while Mako’s family watches her talking by herself ((they can’t hear Senketsu))), Ryuuko decides to wear it anyway, because she needs protection. And so, once she enters the school, the fight begins!

Now, let me tell you two useful pieces of informations…
1)Second part is coming out tomorrow.
2)A new short Gaki no Tsukai clip is going to be released soon.