Kill La Kill.
Wow, just wow.
I thought it would be just a normal action anime, with few plot and lots of crappy action sequences, but it totally surprised me.
First of all, the art: Amazing. It’s so simple it’s awesome.
Art, animations, characters and situations totally reminds me of Panty & Stocking and Dead Leaves, which are two of the most hilarious yet amazingly epic animes out there.
Compared to P&SwG, Kill la Kill has a linear plot, and It’s not based off only on gags.
I highly recommend it, though only one episode is out: it’s very promising.
Now, for the first half of this post, let’s see some of the most WTF and epic moments.
-Part 2 coming tomorrow-

This moment reminded me of Dead Leaves waaaaaay too much, while the moment right before it, where the door is destroyed and it dashes throught the room making every student in it fly away, was so much p&s-styled.

I kinda like Satsuki, and this scene was epic, though her speech was kinda trivial, pointless and overall lame. I hope we’ll find out more about how began her dictatorship in the school as the story goes on…

The way the writings were animated was stunning. Very original and nice.

OMFG This is the most epic thing I have ever seen. I just came watching this. 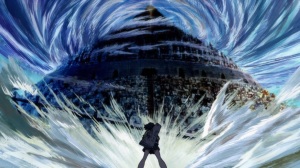 Seriously?! Biting a f**king lemon? A LEMON? And with its peel still on it?! #allmywat

Another Panty-and-stocking-styled moment. I don’t know, but this scene where Ryuuko dodges Mako made me laugh so much. Mako’s attitude kinda reminds me of Brief and Chuck from P&S.
…And yes, Imho, Kill la Kill is the Panty and Stocking of 2013 (and I couldn’t be happier) 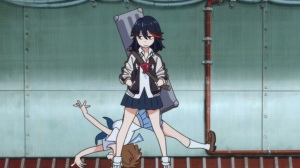 …And that’s how Ryuuko entered the “most badass anime characters” list, and also my personal favourite characters list.

Yes, yes, simply yes! Even when it comes to “serious” parts, it’s always time for wtf-faces and comical sketches (the guy who slips and falls right before catching Ryuuko) 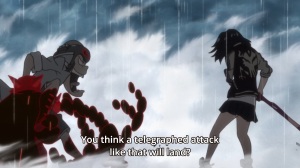